Rang De Basanthi could be inevitable

With the current situation in India a Rang De Basanthi could be inevitable to rid the system of its evils. 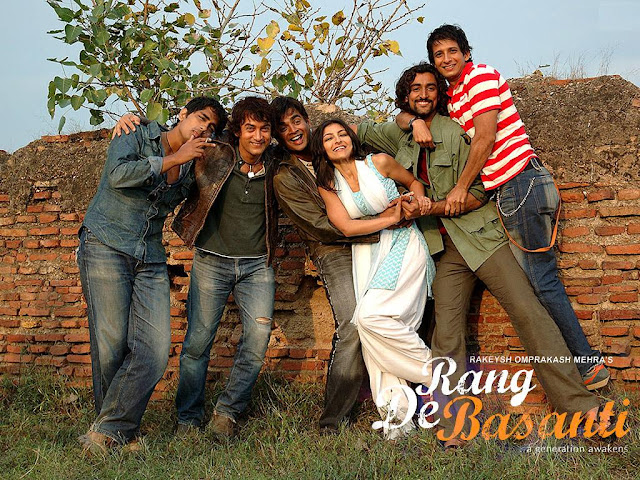 Here is an interesting conversation between me and my friends on the present anti-corruption movement in India.

Roshan D’Silva Really ridiculous what is happening in India. Whatever nonsense the baba was upto the government has clearly over reacted and behaved stupidly.

Krishna Reddy Dude, I feel that we surely need a 2nd independence war (It could be of a Rang De Basanti type.. we need not only Gandhis now but also Bhagat Singhs and Netajis) to cleanse the Indian society, political system, legal system, bureaucracy etc from corruption, red tape in order to enjoy a true independent and happy and prosperous India. Peace alone is not a solution. We probably need some rebels and RDB kinda revolutions and complete reorganization of some of the systems – political, legal, education, social etc – for a faster growth in India. I think that this change is inevitable and imminent. What do you say? Pl check one of my previous posts n share your opinion.. http://blog.krishna-reddy.com/2011/05/injustice-in-india.html
June 5 at 10:35am

Pratik Das Agree with you, Roshan – the planned protest was excessively dramatised and disingenuous. Nevertheless, this Congress led government has no legs to stand on. The growth of the Indian economy has been surpassed only by the growth of corruption and there seems to be no lack of imagination in the scale or scope of corruption either. I was a huge fan of Dr. Manmonhan Singh but this coalition government has paraded the flaws in the Indian democratic system – that one good apple in a basket full of rotten fruit is no delight to behold.
June 5 at 12:16pm

Pratik Das: Until very recently I’d never heard of a lakh crore in the media, although I’m sure many Indian governments have had projects of that scale. The first I came to hear of it was in the context of the telecom scandal.
June 5 at 12:17pm

Pratik Das: Krishna, I admire your passion, but I’d urge you to ponder over something. The collective efforts of so many Indian heroes steered India to independence and, despite the subsequent civil riots, wars, insurgency and the Emergency, their efforts conceded to the Constitution every time. Yet, the foundation of morals and behaviours which rallied the nation was slowly but surely forgotten to give way to corruption before that leading generation had even faded away. What went wrong? If another revolution were to happen, what would keep corruption from taking root once more? What really needs to change?
June 5 at 12:51pm

Krishna Reddy: @pratik, I agree with you.. Yess! we need to ponder on this and analyze the past & learn from it lest the system fails again. Here I am using revolution in a broader sense that includes the ones like we witnessed in the past – green revolution, economic revolution of early 90’s, internet n telecom revolution of late 90’s, dotcom bust to name a few. I forecast we will witness a few revolutions soon, probably, in a much larger scale – most of them for good. A revolution has already started (by Anna Hazare, Sri Sri Ravishankar, Kiran Bedi etc with active or indirect support of most of us) and it had to start.. the time has ripened. When a system reaches a collapsing point, drastic changes will happen in it or the system will vanish. I think we have reached that point now. People now think that enough is enough and no more. It is at this kind of time that massive revolutions happen as history tells.. it might lead to great upheavals resulting in completely different – political, legal, education, cultural, religious, scientific, technological
, power generation etc – systems. I believe this is bound to happen in near future.. we could witness massive change(s) (whether we call it revolution(s) or something else) in 2 to 8 years from now. As you said Yes, we all, collectively as a people, need to ponder what needs to be changed and how. All of us could be part of this change….
June 5 at 6:16pm

Cool, Kind, Loving, Caring guy, I describe myself as Innocent, Naughty, Spiritual person! I am an IIT Bombay Alumnus, Social Entrepreneur and Spiritual Seeker. Find more about me at my iDiya profile.

Latest From My Blog

Indian states I have visited so far!

Thank you friends for your birthday wishes! ?